I waited an extra week to update in hopes of allowing more time for getting through a bigger, denser post...but looks like there's no dialogue to start here, if the comments or my Pageviews function are any indicator.

All Or Nothing, OR: Why Language Might Need More Math

So, full disclosure, I'm not a STEM. I'm a beautiful gorram FLOWER. Which means, I'm not much for the numbers.


I oppose linear progression in all forms -- the unidirectional flow of time, guesstimations of distance/weight/price/etc, making things fit "properly" in the dishwasher -- but not because I chose to fight the ordered human universe. I'm just no good at them.


Do not even get me started on doing math. Impossibru. 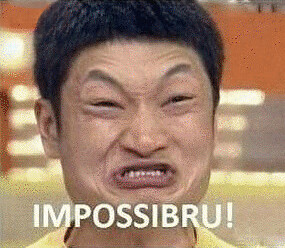 But I still think maybe our language, my beautiful fluid complex English, could stand to have some more quantitatively qualitative words. Not following? Yeah, that's to be expected. Let me try again.

Say you're identifying someone as having a quality -- rich, feminist, tall, angry, funny, racist, whatevs -- you pretty much do just that: Say "You're _[that thing I think you are]_!" No modifiers. Now, there's wiggle room on that; some people use modifying words. "Hey, you're pretty funny," or "That seemed a little angry, dude." But mostly, casual language does little more than point at an object and label it a quality.


So when the person receives their label, they can either accept or reject it; and both reactions have their problems. Because no matter what label you just gave them, unless you just told them "You are so exactly you!" they are probably not 100% just that thing you called them. And thus begins the math.

You said they were something -- let's say tall. Except they are not made out of tall. Tall is not an accurate description of their fundamental essence. They are taller than you are/expected them to be/are used to, but this is a subjective quality, not an absolute. Another person might not -- let's face it, with all the disagreeable people we've got out there, probably won't -- agree that they are tall.

So say they agree, or bought into it, or hear it enough that they understand the general consensus -- "I'm tall." And then they run into that disgruntled 7'2'' runner-up from the Tall Man convention, who reacts to their self-description of being tall by screaming "You think you're tall? You think you know ANYTHING ABOUT being tall?? You don't have to duck through doorways! You can stand upright indoors! YOU KNOW NOTHING!" and spitting in their face a bunch. They were not 100% made out of tall, and so in his mind they defaulted to 0% -- i.e., "not tall".

Or conversely, they reject your assessment -- "I am not!" Translation: "I am 0% the thing you just said." This one comes up a lot for the feminist and racist examples included in the list above, and for different reasons (or ARE THEY?).

Fortunately, our fatuous population has come to a popular consensus that "racism = bad". UNfortunately, there's no guarantee that even well-intentioned people will be insightful, proactive, reflective or especially wise; so, it's a bit of a ham-fisted understanding at best, because most people don't want to think about it...and want to talk about it even less. (Myself included.)

So if "racism = bad", then "racist = bad person," right? And they try hard, usually, to keep from actually murdering their enemies or stealing all the cake in the world, and so like to think of themselves as a good person. Mostly. Like, on average. Y'know. So when you accuse them of essentially being a bad person, they reject it, naturally -- but you didn't actually say they were a bad person, did you? You said "racist." You ascribed them as possessing some undisclosed amount of racism, not being made of racism -- a difference that is important but one that I cannot go into further here, because this is already gonna be a looong post. The point is, the presence of some element of racism does not equal 100% racist. So they say "No I'm not, because remember how I _[totally didn't suck that one time about a racial issue]_," and it's totally legit; yet it doesn't undermine how they just totally blew the Racist Horn of Racism right where everyone could hear it.

They're not an entirely bad person, so they can't be racist; only bad people are racists. So they're not racist. MATH.

There's no room in this kind of language for the idea of "some", and that's where casual speech lets us down; you're either all, or nothing at all. If we had more than 0% and 100% to work with, we could deduce more complex sums...and maybe actually SOLVE somethings. Crazy, I know.

This seems to happen a lot when talking about feminism, too -- unfortunately, the public consensus on feminism is "feminist = angry burly lesbian manhater fanatic." So there's an understandable difficulty in getting women and men to identify as feminist, because they don't feel fanatic or furious enough. (I think most people recognize the burliness & lesbianism as optional.)

And now, break it down: Personal Opinion Time. What adds dimension to this particular problem, and part of the reason women's rights weren't met satisfactorily over a generation ago, is that there are vocal minorities, outliers of the cause whose extreme opinions so do not mesh with one another that the main body of this movement's simple premise is now fringed by a corolla of goal-posts, as to when or how equality will be achieved.


And so there are feminists that would tell you that, simply as a person who thinks we're still living in a world geared towards men as the aftermath of a world that was made for and by men in the past, that you aren't feminist -- at least, not feminist enough -- because you are not the"flavor" of feminist that they are. ("WHAT DO YOU KNOW ABOUT BEING TALL?") Which only aids the average person's knee-jerk mental image of feminist extremism...a nasty one-two combo for hindering the gender equality effort. If to even speak about continued gender inequity is going to be associated with extremism, then we are silenced -- not by some final-boss-battle called The Man -- but by everyday people around us, those who'd need to support change if it's ever to occur. And hoo boy has that been effective.

I'm so glad you asked! Allow me to shift more comfortably upon my soap box; there, that's better. And off we go again.

Did you know English is considered one of the most difficult languages to learn? We keep inventing new words; it's like Sisyphus with the boulder to those poor saps with the Rosetta Stone tapes. We also use way more euphemisms than most of the other Westernized nations.

(I had a Japanese teacher who studied English as her major while in Japan. She became an expert before ever arriving in America. Her first day, she walked into a diner and proudly ordered breakfast in perfect conversational English. The waitress said there was a special on bearclaws, and asked if she wanted one. My teacher fled the place in horror, totally traumatized.)

But we haven't seemed to come up with many middling descriptors; we like hyperbole and superlatives. (Was it funny? Call it hysterical or hilarious. You found their argument unimpressive? Let's call it retarded, and force the parents of mentally disabled children find yet another thing that isn't being used as an insult to refer to their children. Then we'll take that one, too.) It's like we're supersizing not just our burgers and our trucks, but our language as well...and, therefore, our thoughts. No wonder we're politically polarized; we can only think in bright colors.

There's no Threat Level: Mauve. Think about it.

I say it's time for better middling words! Bring back some context and a sense of scope to our day-to-day lives. How about a word for something that you found disappointingly dull? Not shockingly dull, or appallingly dull, or a coma-inducingly dull...just more dull than you had reason to expect, and you felt let down. I would use the shit out of that word. Or a word for when, even though all the elements of a good event are there -- the good food, your favorite people, in your preferred venue -- for some reason, it's just not kicking off. Whether someone's mad at someone else and trying not to bring everyone else down but the group is picking up on the strain, or everyone had individually felt they were too tired to go but had sort of made themselves come anyhow for the good of the group, is immaterial. That feeling of everyone feeling slightly put-upon and aware they aren't having fun, and that isn't anybody in particular's fault, would be so much more useful to me than "It sucked." Then we're back to the ol' 0% -- no fun at all.

How about something that indicates 45% fun-potential? I mean, come on! NUANCE.

I'm fairly certain I'm not alone on this -- though tackling racism and feminism in one go might have lost me some readers about halfway through -- what words are you wishing for? What unexpressed concepts would you give voice, if you could? A living language changes through common usage -- "suspicious" used to mean "behaving in a suspect manner", not "suspecting someone of something", did you know? It changed because everyone misused it the same way! I think that's totally linguistically hot. If we want to use our own specialized vocabulary, and if we used it pithily enough and it caught on, it would be real linguistic change! So, tell us your words; let's change the world for the better reasonable. 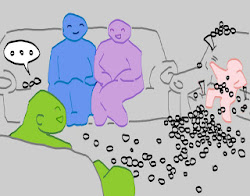 The Ever-Renewed Spiral Into Embarrassment Oblivion 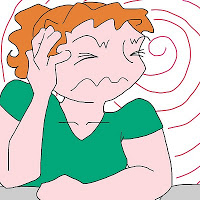 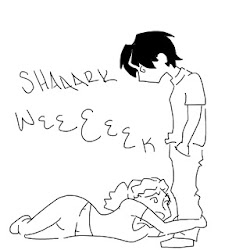 A Well-Spent Childhood In Our Friendly Skies 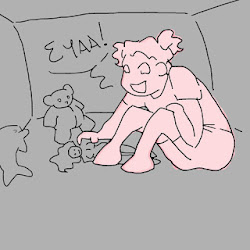 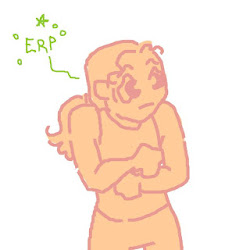 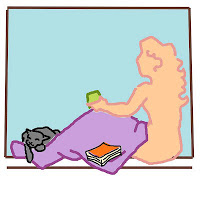